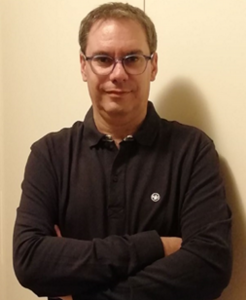 Aldo Parlato received the M.S. degree in Nuclear Engineering from the University of Palermo,Italy, in 2001. He received his Ph.D. in 2005. Since 2005 he received several Postdoc research in the field of gamma irradiation; many of them funded on international research projects. From 2008 to 2015 he was professor with a temporary appointment for a given course or lecture series for the University of Palermo and is co-author of more than 100 scientific publications. From 2015 he is Scientific Coordinator of the Nuclear Research Section, inside the Scientific Research Centre for the Economic Development and Industrial Innovation (S.E.I.I. – A private Research Centre). He has been coordinator of D2SENSE Project (Italy-Israel Cooperation Programme), and is the coordinator of the project FGD Dosimeter (EIT Health RIS Innovation Call ). He is Qualified Expert in Radioprotection.

Cristiano Calligaro received the laurea degree in Electronic Engineering and the Ph.D. degree in Electronics and Information Engineering from the University of Pavia (Italy) in 1992 and 1997 respectively.  He holds 20 patents mainly in the field of multilevel NVMs and is co-author of more than 50 papers. He has been coordinator of RAMSES and ATENA Projects (Italy-Israel Cooperation Programme), SkyFlash (European FP7 Programme) and EuroSRAM4Space (Eureka Eurostars Programme). He is IEEE Senior Member and Eureka Euripides reviewer.